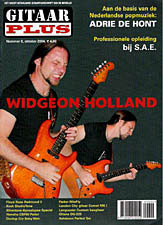 This my intriguing question when I open the case of this 5 string Langcaster Swamp Kauri bass guitar. Acoording to the certicate of the University of Groningen, the Netherlands the wood of the body, Swamp Kauri, is more then 35.000 years old. CEES BAKKER investigates if you can hear this.

Super basses
Fender, Gibson and Rickenbacker were in the fifties and sixties the main bas guitar builders, but from the beginning of the seventies this changed. Music Man was one of the first brands that with different models broke the hegemony of Fender, followed by the German Warwick and the British Status. In their footsteps numerous companies and small workshops were founded who thought they could fulfil the individual demands of the bass players. The use of exotic woods like Zebrabno, Coco Bolo, Wenge, Bubinga, Purple Heart and Padouk became of the trademarks of the so called super basses.
I had never heard of Swamp Kauri nor bass guitars from New Zealand. The enormous Swamp Kauri (Agathis Australis) tries, a kind of wood related to mahogany, come from the prehistoric swamps of New Zealand. The chopping of it was restricted by The National Environment Society and until the second World Word the Italians were the main buyers. In 1940 the New Zealand government established an export restriction for not crafted Swamp Kauri wood. The Dutch emigrant Jaap Tiedek took advantage of this and started in 1983 manufacturing table top from this wood. Anohter Dutch emigrant, Joop Lang, derived from this the idea of building Swamp Kauri guitars and bass guitars.

The man and his dream
Joh Lang was born in Amsterdam and built his first guitar on his sixteenth. He was editor of the Dutch Buddy Holy Fanclub magazine and was singer of The Misfits and The Teddy Bears. But he couldn't live from this and so Joh established his own lithography company. He couldn't live with all Dutch laws, regulations and restrictions so he had his youth love Loes emigrated to New-Zealand. With his sense for Dutch entrepreneurship he was successful. At first he scored with the first full colour pop magazine Pop Score Magazine and then as booking agent and photographer. After that he created the biggest audio visual stuio of the country. Jo, as he calls himself now, decided that at his fiftyfith he wanted to do pleasant things so he sold his studio. With this money he recorded a CD with synthesizer music. In 1999 Joh started his career as a professional guitar builder with a Stratocaster model. This first trial was executed with Kaleidoscope lacquer. Because of its hologram effect this was an unique guitar, but the disadvantage was the price of the lacquer, 450 Euro. Joh started in 2000 with manufacturing Swamp Kauri guitars. One of the first pickups he used where the Australian Kinmans. Like alle guitar builders he was not satisfied with these and he developed his own even lower noise Langcaster pickups. In the beginning almost all Langcasters were exported to the U.S.A. but in September 2003 the Dutch company RSL brought the first Langcasters to Europe.

The same look but different
At first glance this looks like another Fender clone, the body of a Precision and the execution of a Jazz bass. But that's the only resemblance. Look at the big stair shaped peghead. Not everyone's taste, but an unique shape. The 4,3 cm thick body is somewhat slimmer and the horns resemble of a Burns Bison, but are based on a Maori motif. The Swamp Kauri wood looks fantastic to me. The random shaped roots are filled with clear epoxy, so you see the fossil particles. Therefore no Langcaster is the same. The left bottom part is shaved down and the backside has belly shaping. The body is finished with a clear high gloss polyester lacquer. All woodwork looks very professional. The difficult operation classes this model is totally different from production guitars.
The neck is made of flamed hard rock maple with a beautiful grain. The headstock is based on an old Maori motif and the carvings too. The Schaller M 4 tuners are mounted four by one. Two string retainers with jade inlays insure correct string alignment to the graphite top nut. Underneath the thick ebony fretboard two graphite reinforcement rods are mounted next to the truss rod. This idea we saw a few years earlier with the acoustic Taylor models. The 22 Jumbo frets are nicely finished. With a definite D shape and a Tung oil finish Lang desn't choose for tradition. He has outstanding ideas and uses these very effectively. For instance the neck/body joint. The neck is mounted to the body with six screws, four visible and two underneath the neck plate. The choice of Schaller JBA pickups for this model is rather unusual. These are active humbuckers in a single coil housing fed by a 9 Volt battery. Each pickup has its own volume control and joined passive tone control. Normally I prefer a balance control but with these active pickups you have more possibilities in this way. The knobs are made b y Schaller. The three dimensional bridge comes also from Schaller. The saddles are not only length- and height wise adjustable, but also the spacing between the strings can be adjusted. The bridge is provided with grooves for the saddle height adjustment screws. With inventive additions the builder has created a nice concept which is complimentary when playing the bass. The Schaller strap locks make the picture complete.

Optimal covering
For years I didn't want to do with 5 string basses until February last year when I was asked for a jam session and had to play on a 5 string Ibanez. That was the turning point. I bought a 5 String Ibanez ATK because of its slim neck and numerous sound possibilities. This Langcaster is a totally different piece of the bass cake, exclusive, extremely reliable hardware and simple controls.
The first surprise is the complete lack of noise. Even notorious jamming stations like TV and computer doesn't have the slightest influence on this bass. The active electronics are very well shielded from the outside world. The choice of Schaller JBA is fully justified by special tone: clear, brilliant, totally even over the full bass spectrum en more dynamic then for instance active EMG's. In comparison I found these active pickups even better then my favourite Bartolini en WAL pickups. Apart from that the sustain is very outstanding. This Langcaster sustains almost forever. Moderately plaid you hear Fender sounds, but on full blast the Langcaster shows its own individual character which can be applied for every possible music style. The La Bella Super Steps piano strings of which only the kernel runs over the saddles definitely are a positive factor to the sound. The small an shallow neck feel pretty good and invites for speeded up bass exercises evene for someone with small hands like me. If you are looking for a disadvantage you will find only one, that the weight of more then five kilo's: if you want a world sound with an in sane sustain then you have to suffer!

After four weeks
Joh Lang builds bass guitars since 2002 only. This bass guitar is the proof that he surely knows every trick of the bass building book. A perfect bass, fantastic appearance, top quality hardware, superior playing comfort but most of all because the sound I was sold. The combination of ultramodern active humbucker from Schaller and 35.000 year old prehistoric wood results in a beautiful tone with an endless sustain. This Langcaster has only one big disadvantage, you have to apply for hefty loan. No wonder seeing the quality of the used materials and the fact that Joh Lang, his son and an associate manufacture only fifty instruments per year. Also you have to appreciate that in this age of mass production form the Far East a Dutch New Zealander dares to put his head above bass- and guitar bowling green.
Langcaster has an interesting website with sound samples: www.langcaster.com .

35OOO Year old Kauri is hard to find and a treasure to have.